I actually left work nearly on time.  5:41pm I was clocked out and walking out of the cave.  It rained on the drive home.

The mailbox was jammed with stuff.  (Including one of my NaNo rewards.)  The front porch was jammed with stuff.  Tracfone sent me a refurbished replacement phone because my current phone won't work in beginning in December.  So I gots a free phone!  The winter coat I ordered from Land's End arrived.  I'm a bit undecided on it.  Maybe I should not have gotten the parka (to go over my behind and keep it warm) and gone with the regular length.  It's a little bit difficult to use the front pockets comfortably.  The knock-off Eileen Gray Breakfast tabe arrived too.  Parts were poking out of the box but all of the parts were there and nothing looked damaged.  One part was put together already which I had to take apart to get the glass back in the right way.  And it bit me so I bled a little.

Much hilarity ensued in the kitchen.  I had no idea boiled over Skyline Chili could bubble that far.  I found some on the floor nearly by the bathroom... that's at least a foot away from the stove.

A phone call from Cincinnati put dreams of a Corgi in my head.

So after 30 minutes of writing my total count is 2746.  I'm confident I'll break the 3k mark tomorrow. 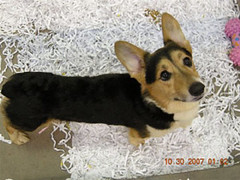 New Furkid
Originally uploaded by Lanadena
Sweet guy. This all happened so fast I'm suddenly scared and worried. Bought food, treats, new leash and a collar after saying goodbye to him.
Collapse