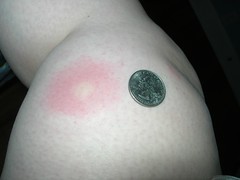 Flea Bite
Originally uploaded by Lanadena
One of the more popular phrases in our house is "Damnit Sammy!" We say it so often that he thinks it is a term of endearment.

I think one of the stray cats who sits on the front porch love seat has fleas. Sammy's been scratching his behind and I keep telling him he better not have fleas. Earlier this week he was nibbling on his rear and nibbled my arm by accident. "Ouch!" was soon followed by "Damn It Sammy!"

Yesterday I spent several hours on the front porch reading. Even though it's not his fault I have flea bites (some are bigger than this one) all over my legs, I can't help but think in my head... "Damn It Sammy!
Collapse