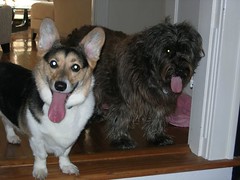 Sammy and Bailey
Originally uploaded by Lanadena
For most of the day, Sammy had a guest. Her name was Bailey. She was found at the end of our street by some renovators/construction workers.

My husband had never seen her before and couldn't leave her out in the heat all day. She was very attentive to him and just wanted to be petted. The county shelter/dog license office wasn't open yet so it took him a while to find the owners.

Bailey's a terrier mix and my husband was crushing on her a little which made me crush a little too. Her legs looked like they belonged to a wookie.

She's back with her family but now I think my husband and I are thinking about a second dog. We may have to resort to a puppy. Sammy got along fine with Bailey while my husband was around. (He was left in his crate like usual.) When it was me with them he tried to tell her that I was his and he was the alpha dog.

When Sammy's girlfriend was a puppy he ignored her but now that she's all grown up, he acts like she's the best thing he's seen all day.
Collapse